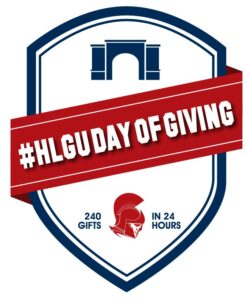 Hannibal-LaGrange University’s first ever Day of Giving was a massive success.

The HLGU Day of Giving also featured three matching gifts that were all met.

A matching gift up to $2,500 toward the Dan Hurst Softball Scholarship was met with $2,855 raised. With the match, $5,355 was raised in total toward the scholarship.

Time Left until the next HLGU Day of Giving

What is HLGU's Day of Giving?

On HLGU’s Day of Giving, the Trojan community will come together in support of one goal. On April 15 at Noon until April 16 at Noon, we ask you to join your fellow alumni, students, faculty, staff, and friends by giving back to HLGU and the program that impacted you at https://www.hlg.edu/scom/giving.php. HLGU has set a goal of 240 new gifts to the University in this 24-hour timeframe.

Why should I and others give?

Because your gift benefits current students and gives them the kind of educational opportunities you had. When you give to the area of the University that is most important to you it is an investment in our students’ futures and in HLGU’s reputation.

How do I participate?

How can my gift be counted toward the Day of Giving goal?

Make a gift online or by phone between Noon on 4/15 and Noon on 4/16 and your gift will be counted towards our total.

Who can participate in the Day of Giving?

Absolutely anyone can participate! Alumni, students, friends, parents, faculty, and staff are all welcome to consider making a gift. Any and all gifts made to HLGU will be counted.

Can I make my gift to any area?

Yes: 100% of your gift will go to the designation of your choosing. Donors may choose to designate their gift to any program, team, or fund at HLGU that already exists. Just indicate on your giving form where you would like the gift to go.